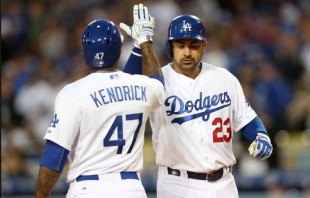 DFS911.com has your daily fantasy sports MLB picks and previews for Sunday.

Detroit’s Miguel Cabrera has been hot against Houston’s Roberto Hernandez, going 14-for-39 at bats with 3 homeruns, 5 extra base hits and 8 RBIs.

Rajai Davis is even hotter against Hernandez, going 9-for-21 at bats with 3 RBIs.

Howie Kendrick has the best ERA of the day versus an opposing pitcher.  He has posted a .517 ERA vs. San Diego’s James Shields.  That’s more than half his at bats (15-for-29) translating into hits.  He’s also had 7 extra base hits off of Shields.

Mike McHenry is 5-for-11 off of Tim Hudson while DJ LeMahieu is 5-for-14 off of him but he’s carrying a .326 ERA into this game having hit in eight of his last nine.

The Nationals Bryce Harper is 9-for-20 off of Aaron Harang while Danny Espinosa is 5-for-12.

As for starting pitchers this day, Minnesota’s Kyle Gibson has permitted a mere 10 hits off of 64 at bats against the current White Sox roster.