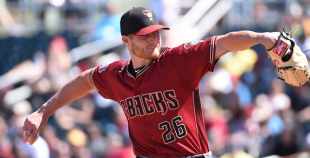 Shelby Miller of the Arizona Diamondbacks appears to be an excellent option Friday versus the San Francisco Giants when it comes to your Daily Fantasy Major League Baseball roster.

In seven of his last ten games he allowed three or fewer runs but is coming off of one of his worst starts of the season, giving up 11 hits, seven earned runs and a walk over six innings in Saturday's 11-6 loss to the Rockies. (Sun Jun 26)

Miller is 2-2 with a 2.65 ERA in six career starts against San Francisco and lost to the Giants on May 13, when he gave up three runs and seven hits in 5 2/3 innings.

Note that the UNDER is 8-0 in the last 8 meetings in Arizona.