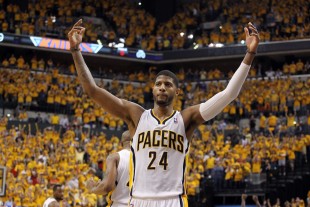 DFS911.com has your NBA Daily Fantasy Hot Players breakdown.  Who are the current top DFS players in the NBA?  Prices used are from DraftKings.

Paul George – Indiana Pacers - $8600 - Over his last ten games, George is averaging an impressive 43 fantasy points in 36 minutes per game.  Play him versus teams that rank poor against small forwards.  This included Monday night’s game versus the 76ers where he didn’t quite reach that 43 fantasy points average.

Evan Turner – Boston Celtics - $5500 – At this price, Turner needs around 25 fantasy points and has been averaging slightly below 30 in his past six games. Prior to Monday night’s game, Turner is averaging 35 minutes, 14.7 points, 6.5 rebounds, 3.3 assists, and 1.7 blocks/steals.  Just make sure he is in the starting lineup with this price.  Monday night in the Celtics 107-96 victory over the Magic, Turner scored 16 points, had 5 rebounds, 4 assists and 1 block, which was pretty consistent with this previous six-game average.