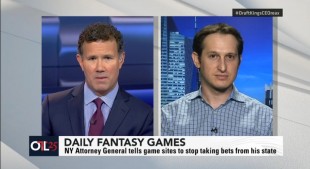 Appearing on ESPN’s “Outside the Lines” Friday afternoon, DraftKings co-founder Jason Robins said he is optimistic that his company can continue operating in New York State despite the Attorney General there demanding they stop taking bets from NY residents.

Hiring the top legal brains sends a message that “We think we wanna win and we can win”.

These include the likes of Randy Mastro and Deb Wong Yang of Gibson Young along with the lead partners in Boise, Schiller.

Robins would not talk about the prospects of winning.

But if they don’t win?

He added that the company is aware there are legal avenues to take in order to challenge a decision that was made “especially one that was made quickly and without notice by a single individual and we intend to do that”.

But, he added, if the Court is decide Schneiderman is correct in his decision, “we will continue to follow the law and only operate in states that we are allowed to operate in”.